top of page
This site was designed with the
.com
website builder. Create your website today.Start Now

The Veterinary Genetics Laboratory at the University of California – Davis and the Lyons Feline Genetics and Comparative Medicine Laboratory at the University of Missouri announce the release of the new genetic test for progressive retinal atrophy (PRA), which causes an autosomal recessive blindness in Bengal cats. The disease causes the destruction of the cells that register light (photoreceptors) in the back of the eye (the retina). The loss of the cells begins around 7 weeks of age and slowly progresses until the cat has very compromised vision by approximately 2 years of age1. However, blindness develops at different rates in different cats. We have examples of cats over 2 years of age chasing a laser pointer; however vision testing by an ophthalmologist indicated that the cats should be blind. Blind cats tend to have more difficulty at night, sometimes becoming more vocal and more attached to their owners. The pupils are usually more dilated for affected cats than for cats with normal vision in the same lighting conditions. Affected cats also tend to carry their whiskers in a more forward position. Once affected cats know their surroundings, they are very mobile and active. Our thanks to the breeders who came forward and helped us establish a colony so that we could define the condition and find the gene responsible for this defect.

The mutant DNA variant appears to be novel to the Bengal breed and occurred early in a popular lineage of the Bengals. We expect Bengal cats worldwide to have the condition and we have had reports of affected cats in the United Kingdom, Europe and the USA. Bengal PRA is autosomal recessive, thus two copies of the mutant DNA variant are required for the cats to be blind. The blindness can be detected either by the DNA test or by an eye exam prior breeding age. Carriers, cats with one copy of the mutation, can only be detected by the DNA test.

Because the mutation is recent in evolutionary time, an extended DNA region and several genes around the casual mutation had to be examined as many DNA variants appeared to be perfectly linked with the blindness. This is a common and well known phenomenon, called linkage disequilibrium. Other examples of linkage disequilibrium have been published for cat DNA variants that cause Brown coloration2 and cat AB blood group.3

linked with the disease. Only by continued cooperation and participation of breeders was this discovery possible!

To the best of our ability and knowledge, the new test is correct and perfectly linked with the disease. However, we are limited by the cat samples obtained for research and we will continue studies to demonstrate the function of this gene in cats. We will be publishing this research in a scientific journal, however, we are releasing the new test ahead of the publication because breeders are continuing to use carrier cats and even blind cats in their breeding programs, and thus Bengal PRA blindness is rapidly spreading.

Check back soon
Once posts are published, you’ll see them here. 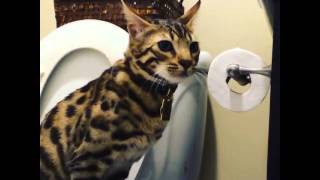